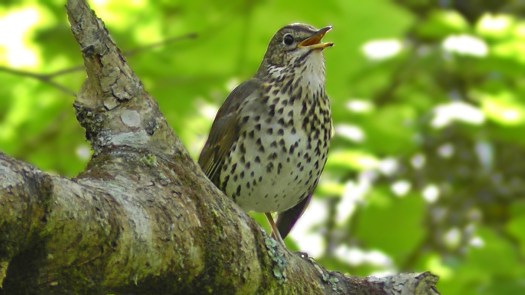 If you were sitting in a café in Seattle typing this paragraph and had a sound level meter with you on the table, you would record noise levels that varied between 50 and 100 decibels, the louder sound being the jarring, metallic slap of the ground espresso disbursement machine. The barista has to clack the damn thing multiple times every time he or she fills an espresso order. Underneath that noise, the next loudest noises compete: a woman’s voice behind you and a loud soundtrack above your head and to the right. You also hear traffic passing outside an open door, private seaplanes and commercial jets flying overhead, the clanking and clunking of dishes and other assorted activities behind the coffee bar, other human voices in various pitches and volumes, and the more noisy yelling and screaming of children in the nearby playground. You might also hear an occasional songbird in the trees outside because it is spring. All on a Sunday morning in one of Seattle’s quietest residential neighborhoods.

What this means for your body is that you blood pressure and vascular health are being negatively affected. Your fight/flight response is being dulled. And it’s getting harder for you to listen because there’s a good chance your hearing is already partially impaired from the loud noise you’ve already been exposed to during the course of your life if you have lived in a big city. Or operated heavy machinery without protecting your ears. Or listened to a lot of loud music.

Couple these facts with another fact known to psychotherapists: many people, if gifted, are unusually sensitive to noise. Noise can become mentally lethal to these people. It’s hard to believe that we would live in a world in which we would do this to ourselves, but that’s what’s happening. Quite simply, we’ve lost all of our silence, and we have most certainly lost almost all of our quiet.

Which brings me to just one question: Why would anybody invent anything louder than birdsong?